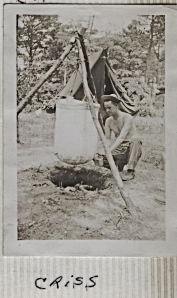 Russell on maneuvers, probably in Texas

“I got a letter from Russell written that Sunday [December 7, 1941]. He was very discouraged and down knowing that the year he signed up for would stretch into no telling how many years and that he would probably be going into combat and might never get back. He had written home for some of his civilian clothes so he could cross over from El Paso, where he was stationed, into Mexico, which was just across the border, because you were not allowed to go over in uniform. His clothes got there the day after war was declared and then you could not be out of uniform, so he never got to Mexico, at least not until many  years later.

Mamie, Tricia and Sara, 1942. The old Attlesey house is visible in the background.

“By 1942 there were not many boys left in town. Those who had not been drafted had signed up in the Air Corps, Navy, Army or Marines. In late 1941 the Farm Security had transferred me back to Greenville. Miss Annie did not have a vacant room so I found one at Miss Hazel Wheatley’s home, which was also near downtown. There I had to share the bath with about six other girls, and it wasn’t as much fun as staying at Miss Annie’s. However, I was just glad to be back in Greenville after they had farmed me out for a week in Charleston and two weeks in Lexington. In Lexington I had to stay in a big boarding house. There was a pot-bellied stove in my bedroom, and Mr. Ginn came in early every morning to light the fire. I would pretend I was asleep since I was embarrassed to have him coming in my bedroom.

“Some girls I had met while I was in Greenville before asked me to share an apartment with them, and I would have been much happier I am sure, but Mama just did not believe in young girls living in apartments with no chaperones.”