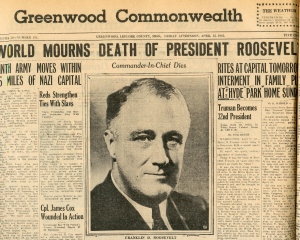 “Big, who had been a nurse before her children were born, went back to her profession when the war started and there was a shortage of nurses, since many had joined the Army Nurse Corps. She did volunteer work at the hospital and studied to bring herself up to date before she started to work for pay. Everyone said she was one of the best and most dedicated nurses at the hospital, and she was very much in demand as a private duty nurse. She nursed for a good many years after the war ended.

“On April 12, 1945, I left the Chamber of Commerce to go by the post office on my way home at five o’clock. I made several trips a day to the post office, which was right across the alley from City Hall and checked Box 575 to see if I had any mail from Russell. A lady at one of the windows in the post office asked me if I knew that President Roosevelt had just died in Warm Springs, Georgia. I had to wipe the tears from my eyes, and everyone else seemed to feel the same way. He was in his fourth term of office, and since he had been president since I was eleven years old, I could not imagine how the country could operate without him, especially since the war in both Europe and the Pacific was still going on.

“We stayed close by the radio for several days as the commentators described the train going to Washington and then to Hyde Park, New York, with thousands of people lining the tracks all the way, and the blind accordion player playing ‘Going Home.'”

“I have never heard that song since that I have not thought of those sad days. As the years have passed we have come to question some of the things that he did while in office, but I will always think for those times he was the leader we needed.”

Sara loved politics and found politicians fascinating, if often disturbing. She followed most of the conservative South into the Republican camp during the 1960s, and I will always believe that the 2008 election accelerated her decline down a path into a world she no longer recognized. And when you look at those pictures of Franklin Delano Roosevelt and compare his demeanor and grit to the current crop of 2012 hopefuls, you can understand Sara’s concerns for her country.