Tomorrow, When the World is Free 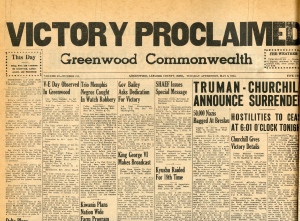 “The war in Europe was winding down and it looked like it would soon be over. On May 8, Victory in Europe was declared and we celebrated V-E Day. Botts [Blackstone], my boss, did not like to give holidays any time except the traditionally observed and did not see any reason for businesses to close or people to take off. The churches were having services that day and many places were closing, and I pouted until he finally told me to go on home. 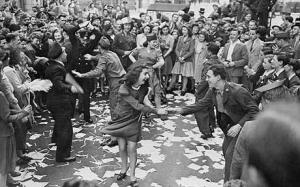 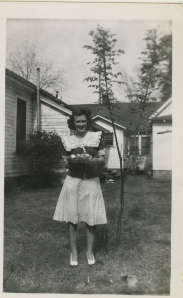 “Russell was counting his points which added up to a discharge and sweating it out in Europe waiting to come home, but the wait stretched out until September. Everyone at home was gearing up for the return of the boys and looking forward to peace time and hoping the Pacific war was also coming to an end. Then in August President Truman announced that the atomic bomb had been dropped on Hiroshima and Nagasaki and that the world was at peace. The Commercial Appeal ran huge black headlines, ‘World at Peace,’ and people everywhere went wild celebrating in the cities. It was still hard to believe that after hearing about war since it started in Europe in 1939 we could now say that it was all over.”